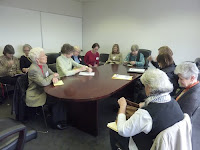 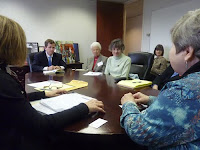 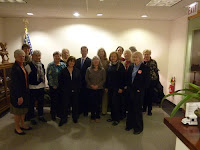 LWV MEMBERS MEET WITH CONGRESSMAN ROBERT DOLD
On Thursday, April 28, 2011 at 1 p.m., representatives from 10 different Leagues in the 10th Congressional District met with U.S. Rep. Robert Dold. The meeting was chaired by Joan Kaltsas, League of Women Voters - Lake County. Ms. Kaltsas explained that the League of Women Voters is a large organization, in all 50 states, Puerto Rico and Hong Kong and that there are 44 Leagues in Illinois. She said that we are non‐partisan, and advocate positions on issues but do not support specific candidates. The 15 League representatives then introduced themselves.
Dold Introduces Himself and states his priorities
Congressman Dold described himself as owner of a family business in pest management who grew up in this district. He has been a scoutmaster for 11 years and is an Eagle Scout himself. Congressman Dold's priorities are Great Lakes protection, human rights, jobs and the economy, and reducing federal spending. Along with Democratic Rep. Lipinski, he introduced the Great Lakes Water Protection Act. It was referred to the Transportation Infrastructure Committee. It is also supported by U.S. Senators Kirk and Durbin.
Dold on Human Rights, the Economy, Spending Reduction
On human rights, he introduced bills supporting the Bahais in Iran and recognizing the Armenian genocide. On jobs and the economy, he supports pro‐growth strategies for the private sector, not government. He works with the nine Democratic freshmen on this, as well as the 86 other Republican freshmen. He wants only smart regulation of business, not constraining regulations such as the 1099 requirement for small business. He supported repeal of this requirement. On spending reduction, Dold believes the Republican interests, e.g. in defense and agricultural subsidies, should be cut first, to show good faith to the Democrats. Every federal department should be cut except aid to Israel since it is our "only ally" in the Middle East. Dold believes overspending must be stopped by both parties "if the American dream is to come true for our children and grandchildren."
Dold on the Clean Air Act, Voting Rights, Transparency in Government
On the Clean Air Act, Dold said the EPA "fills a role" and that the carbon footprint must be reduced, but only in ways that don't put companies out of business. Some regulation is needed but it must pay off for business. He favors extension of the renewable energy tax credits due to expire in 2012. On voting rights, Dold favors making it easier to vote. A signature, not a picture, should be required to identify voters. On transparency, due to the Citizens United decision, he fears that shell corporations are cropping up to enable rich individuals to influence elections.
Dold on Civility in Discourse
On civility, i.e. partisan bickering, he seemed proud of working with Illinois Democrats (e.g. Gutierrez, Lipinski, etc.), the nine freshmen Democrats, and the "blue dog" Democrats on legislation. He said moderates like himself in Congress are rare due to redistricting that protects safe districts for both parties. He also said that independent voters determine elections, and they will swing to the other party if incumbents don't produce. When asked about dissension within the Republican party, he said that across‐the‐board cuts are needed but again, not in aid to Israel. This aid also must be audited to ensure that it doesn't go to terrorists (Hamas). He believes both parties are angry that the Administration didn't consult Congress before entering the conflict in Libya. He supported ending the Joint Strike Force Fighter program.
Dold on the Affordable Health Care Act
On the Affordable Health Care Act, he criticized the process by which it was written without Republican input more than the content. He said we need health care reform, citing that cost for health care in his company has risen 44% in a short period. He would replace/reform provisions rather than repeal it. He favors the pre‐existing conditions provision but wants malpractice reform and competition across state lines so that employers can purchase plans anywhere in the country.
Posted by LWV of Lake County, Illinois at 1:01 AM No comments: