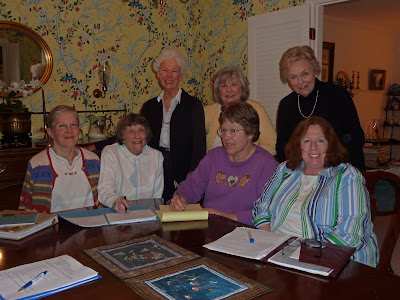 Members of the LWV-LC luncheon committee
We are 40 and Celebrating!
Forty years have passed, and the League of Women Voters of Lake County is looking forward to the next forty. “Back to the Future” is the theme of its birthday luncheon on Saturday, June 19, 2010 at South Gate Café, Lake Forest. Quite a party is planned, no dancing in the aisles, but certainly some laughs, reflection, and a call to action. Anyone interested (past, present, and future) in the League may join the celebration.

The League of Women Voters of Lake County (LWV-LC) has accomplished much over the last40 years. Hundreds of citizens from high school age and above have registered to vote with the help of the League. Through the League’s efforts, thousands of citizens, after attending candidates' forums or viewing the programs on cable TV, have been able to make informed voting decisions. They have been held for elective offices at all levels of government within Lake County: mayor, township, county, state, and U.S. Congress. Depending on the candidates, the forums have been amusing, boring, interesting, surprising, but always educational.

For 14 years, the League sponsored, and members volunteered at the Kids First Health Fair held in Waukegan. Over the years, thousands of deserving children received medical checkups and school supplies in this Back-to-School activity held in August.

State Senator Susan Garrett has appreciated the many facets of the League over the years. As a League member and as a League past president, she attended many candidate forums: now she participates in them. Senator Garrett said, "I am thankful for the League's work in educating both the public and elected officials. I always can depend on League members to be knowledgeable about the issues and to provide strong feedback. The League strives to make democracy work for all citizens."

The Lake County Board has issued a proclamation honoring the League and will present it at its June 8 meeting.

During the luncheon, members will honor many of the past presidents. Invitees include Phyllis Albrecht (Lake Bluff), Gail Brown and Barbara Volin (Highland Park), Madeleine Fuqua (Waukegan), Joan Kaltsas (Lake Bluff), Cari Sevcik (Lake Forest), and Sally Zeit (Waukegan) who each led the League vigorously while focusing on pertinent issues.

Over the years, the League has studied and advocated on such issues as transportation and land use, watershed management, and criminal justice. LWV-LC has held many public programs on such diverse subjects as health care, the death penalty, and the reuse of Fort Sheridan, to name a few. Many of these programs were videotaped and shown on public access TV.

Guest speaker, Corinne Wood will provide a look into the future. As a board member of Chicago Metropolis 2020, she will update us on its progress, and the future prospects of our shared interests. She also will address political reform, another League favorite subject.

Corinne Wood is a long-time League member and Lake Forest resident. She not only was the State Representative for the district, but went on to become the first woman Lt. Governor for Illinois. She played an important role leading efforts on health care, downtown economic development, rural affairs, family issues, and the environment. After 20 years in public service, Wood remains active in local and state politics by serving in various roles with the Illinois State Republican Party, the Lake County Republican Federation, and the Illinois Lincoln Series. She continues to speak on issues of women’s health, public service, and politics.

Chicago Metropolis 2020 is an organization that was formed by the Commercial Club of Chicago with a mission of ensuring that the Chicago region is one of the places in the world where people most want to work and live in the 21st Century.

Posted by LWV of Lake County, Illinois at 8:11 PM No comments: