August Meeting to be held in Lake Bluff

Our August Board Meeting will be held at 1 pm on Thursday, August 11 at a private residence in Lake Bluff. If you are interested in attending, please email lwvlakecounty@gmail.com .
Posted by LWV of Lake County, Illinois at 10:39 AM No comments: 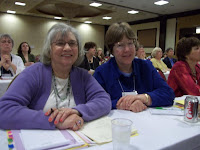 Rita and Rosemary, active members of the LWV of Lake County and their local league, are shown here at the League of Women Voters of Illinois 2011 State Convention. This year's convention was held during June in Skokie.
Posted by LWV of Lake County, Illinois at 10:34 AM No comments:

Click here to read the story at the TribLocal site

Most people in the standing-room only crowd that recently packed an Illinois Tollway forum in said it’s time to get on the road with a Route 53 north extension. And many said tolls on the route could pay for the project.

But since Gov. Pat Quinn supports a west bypass on the Elgin-O’Hare expressway as the next project for the tollway system, Route 53 lingers at the bottom of the state’s top five projects for the next ten years.

“We heard a clear message from voters,” Lake County Board Chairman Dave Stolman said at the Illinois Tollway Capital Planning Forum on July 15. “They want 53 built. We know the extension is vital to economic development. It would promote diversity in our tax base. We are pleased and excited the tollway is considering these projects.”

Although it’s not first, neither is the Route 53 extension last on the tollway’s to-do list. Many other prospective Tollway road projects are not in the 10-year plan, said Bill Morris, a director on the Illinois Tollway board.

Plus, building a toll extension of Route 53 is an alternative to not building an expressway expansion at all, when state funds aren’t there to make it happen.

“Route 53 has made the cut. It’s not going away, but one year is just a way to figure out what we’re doing about it,” he said. “This is going to cost a bucket full of money.”

That’s why tollway officials appointed 25 people to an Illinois Route 53 Blue Ribbon Advisory Council on June 30. Members are both for and against the extending the expressway through .

The advisory council has been charged with developing a regional consensus on whether or not to move forward on the Illinois Route 53 extension, the scope and configuration, the design and elements, and how to finance the project, according to the Illinois Tollway.

“It is daunting to move from controversy to consensus,” said George Ranney, who was appointed by Illinois Tollway officials as council co-chair, along with Stolman.

Ranney has historically been against a Route 53 extension. Tollway officials found a way to bend his ear to get involved in this round of the discussions because of new technologies that would lessen the impact on the environment, and the expertise of the diverse Blue Ribbon panel.

“The advisory council has a whole lot of promise,” he said. “There are ways of working the road through wetlands to avoid a type big modern highway. Although I was opposed in the past, I’m willing to work with the group to try to make it work. I would like to see a good and constructive solution.”

But not everyone is for the extension.

Mary Mathews, a Lake County League of Women Voters representative, said that the 2009 Lake County Referendum showing a 76 percent approval rating for the extension isn’t an accurate portrayal of what residents want. Several people noted that the referendum didn’t include information about using tolls to pay for an extension.

There were 89,522 votes cast in that election, which makes up 22 percent of registered voters in , according to Lake County Circuit Clerk records. Of those votes 64,000 voted for extending route 53 through , and 20,462 people voted against it.

“We are for the upkeep of the current system, but 76 percent of people were voting for it on a light turnout. That was not 76 percent of residents,” Mathews said. “We need mass transportation. We do not need more roads. That should be the primary focus, and taking care of what we already have.”

Environmentalists as well as some officials overseeing the wetlands where the extension would run through were also not all in favor of the extension.

“I have historically been opposed to the road because it could impact a wetland,” said Maria Rodriguez, Long Grove President. “We have got to be very careful on how we protect natural drainage system.”

Members of the Lake County Audubon Society, the Liberty Prairie Foundation and the Environmental Law and , who are on the Advisory Council, shared cautious, but optimistic voices on the possible impact on wildlife and wetlands in .

“The bottom line is the roads have been impressive,” Sarah Wochos, senior policy advocate. “We want to make sure we minimize the impact. We remain optimistic about the future.”

There were many jeers about the discussion of extending Route 53 farther into being nearly a half-century old subject at the three-hour forum.

“This is the time to fish or cut bait,” Morris said.

Posted by LWV of Lake County, Illinois at 10:28 AM No comments:

LWV Testifies regarding redistricting at LC Board Meeting

Many of you are familiar with the League of Women Voters. We work with Willard on voter registration. We have held non-partisan candidate forums for many of you when you ran for office. And then, we also advocate on issues such as: transparency in government. This past year, at the state level, the League worked with a number of organizations to try to get the Fair Map Amendment passed, which the Republican Party supported.

When Chairman Stolman contacted the League along with two other organizations MALDEF and the NAACP, we were happy with the prospect of being involved with the redistricting process. He assured us it would not be political and would not be a repeat of Springfield's shenanigans. Each of you was sent an email of our expectations for the process.

So now today, the full County Board is being asked to vote on the map that the Reapportionment Committee has proposed and approved last week.

The other day, there was a news article that Mr. Stolman said the three organizations, MALDEF, NAACP and the League of Women Voters, found the map to be fair. I am here to dispel any misconceptions about our reactions to the proposed map. The three organizations do believe that the map complies with the Voting Rights Act, and having 4 districts for minority voters is fair. However, we do not believe that the lack of transparency, lack of public notice, and lack of public input is fair. And then there is the gerrymandering! Unfortunately, the Reapportionment Committee did exactly what Mr. Stolman said they would not do: they based the districts on politics and they used Springfield's play book. The only difference was that it was the Republicans not the Democrats.

Years ago, someone who rose pretty high in state government explained that politics was helping your friends and hurting your enemies.

Let's look at some questionable parts of the map. See the northern boundary of District 8. There is a little 2 block section that has been cut out of District 8 and included in District 2. Who does that help and who does that hurt? Or do you really think that small area was excluded to get the population count right?

Let's look at another area. Part of the redistricting process is to keep a municipality intact, so uniting Grayslake into one district seems like a good idea. Although nearby Round Lake Beach is divided into 3 districts, and Gurnee is divided into 4 districts. But currently Grayslake has 2 Democratic incumbents who now will have to face off against each other. And on the eastern side of the county, we find another new district with 2 incumbent Democrats - Audrey Nixon and Angelo Kyle. One would think with a Board of 13 Republican and 10 Democrats, the odds would be that 2 Republicans would be in the same district or possibly one Republican and one Democrat.

Now, for interesting gerrymandering, let's look at the southeast corner, districts 12, 13 and 21. District 21 has become ever more ridiculous than before. Poor little Deerfield was in one district, now is in three. Part of it has been combined with Lake Forest. Lake Forest's natural partner of Lake Bluff has been cut off into a new District combined with parts of North Chicago, Waukegan, and Gurnee. What exactly do those communities share in common? If Susan Gravenhorst weren't retiring, Lake Forest and Lake Bluff would not be separated. So again, who benefits? and who gets hurt?

I think we should just acknowledge that this map was not drawn to benefit the residents of Lake County, but instead, was indeed political to help the majority party. Let's hope that the next time around, we have a better process that serves the people, and allows them to vote for their representatives, and does not just protect the jobs of the incumbents in the majority party.

Posted by LWV of Lake County, Illinois at 10:24 AM No comments: 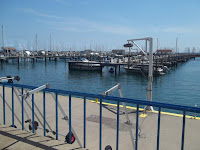 Our July 2011 meeting was held at the Waukegan Yacht Club. We had the pleasure of watching the boats and the calming water while we conducted the business of our meeting.
Posted by LWV of Lake County, Illinois at 10:21 AM No comments: 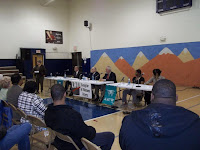 For the Spring 2011 elections, LWV of Lake County and AAUW Waukegan Area Branch co-sponsored a Forum for those running for the Waukegan District 60 School Board. This district covers both the elementary and high schools in Waukegan. The forum was held at Miguel Juarez Middle School. Joan Kaltsas of the LWV Lake Forest Lake Bluff Area served as the moderator.
Posted by LWV of Lake County, Illinois at 10:16 AM No comments: 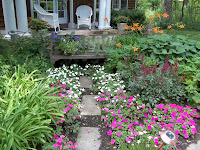 At our Annual Meeting in June we elected officers who will serve for the next two years and voted on our biennial budget.

It was held at Linda's home and we were able to enjoy her beautiful garden.
Posted by LWV of Lake County, Illinois at 10:06 AM No comments: