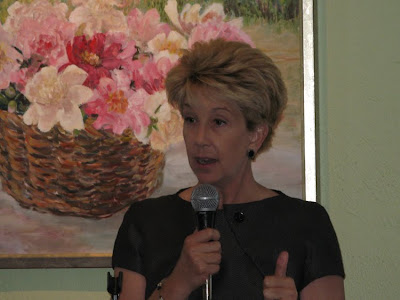 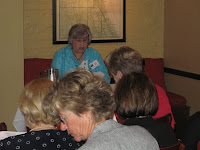 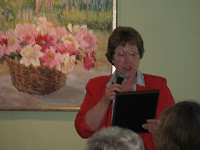 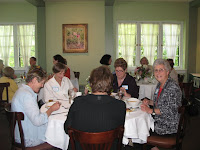 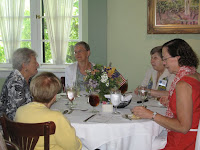 LWV-Lake County (Lake County League) succeeded in mixing business with pleasure! The League held a birthday party along with its annual meeting. On Saturday June 19, over 30 members and guests celebrated the 40th birthday in style at South Gate Café in Lake Forest. The event brought together old friends who hadn’t seen each other in years. Long-time volunteers from Kids First Health Fair reunited. Previous past presidents had a chance to catch up. Every current and past local league in Lake County were represented. Some local elected officials also attended. The food was delicious (especially the desserts) and the room was lovely, with gorgeous floral arrangements provided by Linda Bartmes.

Rita Kirby presided and kept the business meeting short. Due to Lake County League’s biennial schedule, only Program needed to be adopted. Current positions were retained. The County League will continue to register voters (as always coordinated by Jo-An Sabonjian) and provide Candidate Forums. Lake County League Board members will continue to be active in Criminal Justice, Transportation and the 2040 Comprehensive Regional Plan, and the Lake County Women’s Coalition. Other actions may develop from State and National plans for this upcoming year.

The Lake County League responded to two of State’s initiatives last year. The County League was active in promoting the Census in a number of towns, especially notable were Judy Johnston’s efforts in Highwood. Also, League members obtained petition signatures for the Fair Map Amendment. Sally Zeit obtained over 200 signatures by herself!

Last year for the primary, the LWV-Lake County hosted 3 forums in coalition with a number of organizations coordinated by Mary Mathews. Additionally, Diane Sanderson developed an important new partnership with Grayslake High School. The forums covered 6 races at three levels of government. There also was a short program about judicial races in Lake County. The forums were held in Grayslake, Vernon Hills, and North Chicago. (We go where there is a need!)

The County League also co-sponsored with LWV-Lake Forest/Lake Bluff Area the program “Health Care: How to Cure the Chronic Crisis”. This very successful program was videotaped and shown on public access TV throughout the northern suburbs and online.

As part of the business meeting, Jane Partridge reported the recent activities at the National Convention in Atlanta. Membership is up and so is the enthusiasm. There are ample opportunities to be involved.

After the business meeting, the fun began with Rosemary Heilemann leading the way. Rosemary read the Proclamation that the Lake County Board had awarded LWV-Lake County for its 40 years of service to the county. A token of appreciation was given to past presidents Phyllis Albrecht, Gail Brown, Joan Kaltsas, Barbara Volin, and Sally Zeit for their hard work and leadership. Then, Joan Kaltsas addressed the audience with an amusing history of the Lake County League from her perspective as a past president.

Next, guest speaker, Corinne Wood provided insight into the political situations of Chicago and Illinois. Corinne is a longtime League member. As the former Lt. Governor and a State Representative, she has a wealth of experience. One of her many current activities is sitting on the Board of Chicago Metropolis 2020, a coalition partner of the State League. Corinne spoke not only about the status of Metropolis 2020 but also about a sister organization Change Illinois! Corinne along with Paula Lawson, LWV-IL, serve on the Steering Committee of Change Illinois! This organization works for campaign finance reform and redistricting reform. Corinne later expressed her pleasure in visiting with so many women who were dedicated to action and issues.

With that in mind, LWV-Lake County will continue to encourage informed and active participation in government, work to increase understanding of major public policy issues, and influence public policy through education and advocacy.
Posted by LWV of Lake County, Illinois at 8:43 AM No comments: